Hello Pojo Readers, Crunch$G back here with the final part of the Forbidden and Limited List Series and it’ll end with the Semi-Limits. Now there are several reasons Konami might semi-limit a card: bring it down just a little bit in power without going so far as to limiting it, give a top deck that hasn’t been around for so long a little slap on the wrist early on instead of going all in, slowly bringing a card back to three from Forbidden or Limited, or if a card is just so good at three but will be hindered too hard being at one. Despite those several reasons, there are only four cards in the Semi-Limited Section on the list because it’s hard to find that sweet spot between being limit worthy and being unlimit worthy, but these cards arguably found it, so here I’ll talk about all four Semi-Limited cards. 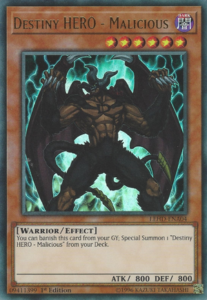 A card with multiple reigns as being semi-limited when not at three. Destiny HERO – Malicious is a Level 6 DARK Warrior that can banish himself from the graveyard to Special Summon another copy of Destiny HERO – Malicious from your deck. Drawing multiples of these sting as Mali can’t be banished from the grave to summon a Mali from the deck, so along with getting one Mali in the graveyard you got to also get the other Mali back in the deck to make it useful. This card was originally semi-limited in September of 2007 due to Airblade Turbo and Dark Armed Return and this card getting bodies on the board for Monster Gate while also controlling the graveyard for Dark Armed Dragon. It was at three again in September of 2008, which gave Tele-DAD the power it needed as you could put a Mali back in the deck from the hand with Plaguespreader Zombie while also having Destiny Draw to discard it, meaning that deck could make easy Level 8 Synchros, so Malicious was semi-limited again in March of 2009 before returning to three again in September of 2013 in the TCG, where it was fine at three with Synchros being out of favor until we got Link Summoning and Armageddon Knight or Dark Grepher putting this in the grave and it banishing itself for another Malicious to go quickly into Link Monsters like Isolde, Summon Sorceress, and Rusty Bardiche. Malicious was just as good for Link Summoning as it was for Synchro Summoning about 10 years prior, so it was semi-limited again in December of 2018.

The card at two with Link Summoning is fine. It helped make certain Link Monsters too easily and only having two makes it less appealing to play in a deck since drawing two will really suck now. Still, some decks will run two and at least a Malicious in the graveyard only really gets you one monster from the deck now and not two. 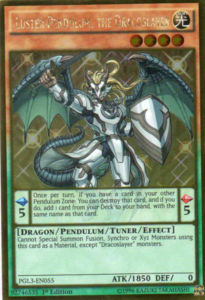 The last card from the adjusted list and the only one that has went beyond the limited status. Luster Pendulum, the Dracoslayer is a Level 4 Pendulum Tuner with a Scale of 5 and while in the scale, once per turn you can destroy the card in your other Pendulum Zone and if you do you add a monster with the same name from the deck to your hand. This can help make Pendulum Summons more massive while keeping a scale for you to have. The best use of this card was with Performage Plushfire to destroy it for another Plushfire and Plushfire would summon something from the deck, and this application works with Guiding Ariadne as well if you played Counter Traps in your Performages and Pals build. The monster effect only allowed Luster Pendulum to be used for the Fusion, Synchro, or Xyz Summon of a Dracoslayer monster, but you had good cards with Ignister, Dinoster, and Majester. Luster Pendulum was limited on the Adjusted List in February of 2016 but went to two in September of 2017.

I think a third Luster Pendulum is fine, the difference between two and three isn’t that big here. Luster Pendulum is still a pretty good card, but it isn’t as broken as it once was, especially if Plushfire stays banned or limited at most. It won’t make the biggest difference if we had another copy, if anything it’d be nice to have again. 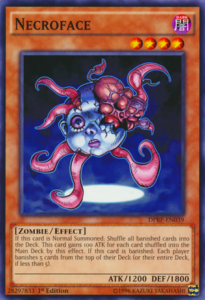 A niche, yet interesting card. Necroface is a Level 4 Zombie that upon Normal Summon will shuffle every banished card back into the deck and have this gain 100 ATK for each card going back to the deck. Very easy recycling in banish decks, works well with the second effect of Necroface, which is probably why it is at two. When Necroface is banished, both players banish the top 5 cards of their decks. This can easily make the opponent deck out, especially if you banish Necroface off Necroface, plus having something like Soul Absorption will give you an insane amount of life points off Necroface. Necroface banishing Necroface off its effect is just so good, which got the card semi-limited in March of 2008, limited in March of 2010, and semi-limited in the TCG in April of 2014 while the OCG has kept it limited.

Three Necroface is just too much as banishing three of them allows for 15 cards banished, meaning you can empty the opponent’s deck easier while your deck likely isn’t deck thinning enough to deck out before the opponent. Not to mention you are banishing a lot of the opponent’s cards, meaning you are likely hitting something important. Also it’s loopable with another Necroface being summoned and Soul Absorption on the field giving you a lot of life points. If anything, you could argue this needing to go back to one, but two is fine for now. 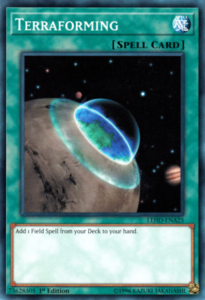 A card that gets better as the pool of cards it searches for gets better. Terraforming is a Normal Spell that adds any Field Spell from your deck to your hand. Now back in the day, we didn’t have many good Field Spells. I guess being able to search Mountain is better than not being able to search Mountain, though. The first good Field Spell to search for was Necrovalley, but that eventually got its own searcher. I’d say this card got good after Dragon Ravine came out, as after that you started to notice the rise of quality in Field Spells. 2015 was when you really started to notice it, and it just got better from there. Terraforming now has a ton of good cards to search for, far better than when it was released, so Terraforming was semi-limited in September of 2018 in the TCG.

Semi-Limited is a niche spot to be in, as you don’t see cards everyday that are fine at two, too good at three, and hindered too far at one. Out of these four, I could see two of them moving with the third potentially moving as well. The semi-limited section is nearly pointless except for a few cards like Destiny HERO – Malicious. Zoodiac Ratpier does seem like semi-limiting it is good, but it was still too good at two so sometimes you get that card too good for two and insane at three, while one makes it useless almost. This list will likely be added to as they move stuff from the list or slightly hit newly meta decks, but it isn’t something you’ll see get as extended as the Forbidden or Limited sections.

This series of articles was fun, and I’ll likely do updates to it as we get new Forbidden and Limited Lists, though those will be new articles. I want to keep this information as up to date as possible, so going along with new F/L Lists might be the way to go to give my opinions on everything.