Home Pokémon Pokemon Featured Writers An Introduction to Pokémon Battle Styles
SW – Battle Styles was named after the new mechanic it introduces to the Pokémon TCG: Battle Styles.  What is a battle style?  Certain cards will now feature a label denoting them as “Rapid Strike” or “Single Strike”, and cards with that label are intended to reflect a particular style of gameplay, as well as having effects that explicitly refer to one Battle Style or the other.  These cards can be Pokémon, Trainers, or Energy. 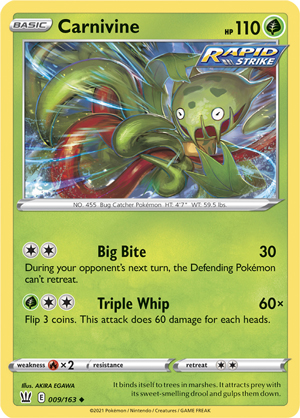 Some of these cards will have Rapid Strike in their names as well, and not just on their labels.  Effects that care about Battle Styles don’t actually care about the card name, but nothing has “Rapid Strike” in its name without also having the “Rapid Strike” label, or “Single Strike” in their names without also having the “Rapid Strike” label.  What the names do affect are the usual game mechanics; the 4 Copy Rule, Evolution mechanics, etc.
Due to the full reveal of the next Japanese set (S5a Matchless Fighters), we know that more Rapid Strike and Single Strike cards are on the way.  It is possible that new Battle Styles could be introduced later.  I will not be scoring or rating any cards in this article.  This is just a (relatively) quick snapshot and overview of what is available to each Battle Style.
According to page 23, Appendix A, of the Pokémon TCG Rule Book (SWSH5 version), “Rapid Strike Pokémon are more proficient with sneaky, technical attacks.”  while “Single Strike Pokémon tend to focus on powerful, hard-hitting attacks.”  Below is a list of all Rapid Strike cards currently available in the English version of the TCG, followed by a quick rundown of what they do.  After that is another list followed by a quick explanation of what the cards do, but for Single Strike Pokémon.  These are not reviews; some of these may be new staples, some may be worthless filler.  I will only include Set and Card Number if there are different versions of a card that share the same name, and even then, only in the lists.
Rapid Strike
The evolving Basics only matter in that they are legal targets for Rapid Strike support.  Support such as Octillery, valuable to Rapid Strike focused decks because its Ability lets you fetch a Rapid Strike card from your deck once, during your turn.  Note the wording is such that multiple instances of Octillery do not stack.  This could add reliability and some speed to Rapid Strike decks, as well as making it much easier to effectively use TecH.
Octillery is the only Pokémon-based Rapid Strike support, but we need to look at the Trainer and Energy-based support before moving onto the other Pokémon.  Fan of Waves is a Trainer-Item that lets you bottom-deck a Special Energy card attached to one of their Pokémon.  Karrina’s Focus is Bianca by another name, but as a Rapid Strike card.  Rapid Strike Scroll of Swirls is a Pokémon Tool that lets any Rapid Strike do 30 to all of your opponent’s Pokémon for [FCC].
Rapid Strike Style Mustard is a Supporter that may only be played if you have no other cards in your hand and an open space on your Bench.  From the discard pile, you Bench a Rapid Strike Pokémon, then draw five cards.  If it is not a Basic Pokémon, that is fine: you still play it directly to your Bench.  Tower of Waters reduces the Retreat Cost of all Rapid Strike Pokémon by [CC].  Rapid Strike Energy provides two units of Energy that can count as [FF], [FW], or [WW].
Carnivine can attack to block the defending Pokémon from retreating, or try your luck with coin flips for damage.  With something like Galarian Zigzagoon (Sword & Shield 117/202; Shining Fates SV078/SV122) as lead-in, Luxray can do 200 for [LC], enough to pseudo-OHKO a 210 HP Basic Pokémon V.  Empoleon V’s Ability can shut down the Abilities on your opponent’s Basic Pokémon that lack a Rule Box.  So it does nothing to Crobat V or Dedenne-GX, but it does disable Jirachi (SM – Team Up 99/181; SM – Black Star Promos SM161).  Empoleon V’s attack is mediocre, and it must be Active for its Ability to work.
Mienshao has the potential for a hit-and-run deck.  For [FC] it does 90 damage, leaves your opponent’s Active Confused, then shuffles itself and all cards attached back into your deck.  Also for [FC], Falinks can attack to do 20 damage for each of your Rapid Strike Pokémon in play.  Rapid Strike Style Urshifu VMAX can deliver 150 damage for [F] if it moved from your Bench to the Active position during your turn; an update to Golisopod-GX.  Or for [FFC] and discarding all of its attached Energy, it can do 120 to two of your opponent’s Pokémon.
Single Strike

The evolving Basics only matter in that they are legal targets for Rapid Strike support.  While not a requirement for all Single Strike decks, it is like a combination of Houndoom, Single Strike Energy, and Urn of Vitality will be common.  Single Strike Energy may only be attached to Single Strike Pokémon, and will discard itself if it somehow ends up attached to anything else.  It provides one unit of Energy that counts as both [D] and [F] at the same time.  It also causes the attacks of the Pokémon to which it is attached to do an extra 20 damage to your opponent’s Active before Weakness and Resistance are applied.  In other words, a Strong Energy just for Single Strike Pokémon.
Where Houndoom and Urn of Vitality enter the picture is in attaching and recycling this Energy, respectively.  Houndoom’s Ability lets it attach one Single Strike Energy from your deck to one of your Single Strike Pokémon, once during your turn.  It also places two damage counters on the Pokémon that receives the Energy.  However, the wording is such that you may use multiple instances of this Ability during the same turn.  Urn of Vitality lets you shuffle up to two Single Strike Energy cards from your discard pile to your deck.  While not speeding up overall setup, this bit of Energy acceleration lets you not only access attacks more quickly than usual, but hit harder at the same time.
The rest of the support for Single Strike Pokémon are mostly Trainers and Energy, but there is one more Pokémon.  Emboar has an Ability that increases the damage of your Single Strike Pokémon’s attacks by 30 when they attack your opponent’s Active.  This does not stack with multiples of itself, but will work alongside other damage buffs, like Single Strike Energy.  Bruno is a Trainer-Supporter which has you shuffle your deck into your hand to draw four cards, or seven cards if one of your Pokémon were KO’d during your opponent’s last turn.  Single Strike Scroll of Scorn is a Pokémon Tool that lets the equipped Single Strike Pokémon attack and do 10 damage plus 10 per damage counter on itself, for the price of [F].
Single Strike Style Mustard may only be used if you have no other cards left in your hand, and if you have an open space on your Bench.  This Supporter then has you search your deck for a Single Strike Pokémon to play directly to your Bench, then draw five cards.  You can select a non-Basic Pokémon and this card’s effect will still put it directly into play.  Tower of Darkness is a Stadium with a once-per-turn effect.  If it is your turn, you may discard a Single Strike card from hand to draw two cards.
Getting back to the Pokémon, Primeape can do 50 damage for each of your Benched Pokémon with at least one damage counter on it, at the price of [FF].  Stonjourner just has a conditional attack to do damage, and a slightly more expensive attack to do more damage, but it can’t be used again the next turn without resetting its effect.  Urshifu VMAX’s first attack can do 100 damage for [CCC], while its second costs [FFFC] and then requires it discard all its attached Energy, but does 270 damage that ignores all effects on your opponent’s Active.  Note that you will receive the damage bonus from any Single Strike Energy (or similar Energy) before discarding it due to the attack’s effect.  Tyranitar V can mill two cards from your opponent’s deck for [DCC] while also doing 60 damage, or [DDCC] do 240 damage while milling your own deck for four cards.  For [CCC], Mawile can use its second attack to do 100 damage to your opponent’s Active that ignores any Weakness, Resistance, or effects on your opponent’s Active.