Our Top #25 countdown will actually begin on Thursday December 7th, as we’re going to close out the last 25 days of 2017 with the Top 25 cards.  We’re kicking things off early with a few honorable mentions.

Some quick notes on our rankings:  These are all cards you can reasonably collect. These are all cards that were available in the United States.  These are cards that appeared in Booster Boxes, Booster packs, and/or Starter Sets. Typical Pokémon fans could have plausibly obtained these cards through auctions, trades and/or blind luck pulls.  There are no cards in our list that were given out as prizes for winning contests.  All values are based on actual sales of Pokemon Cards on eBay in 2017. Our Prices are based on Professionally-Graded, Gem-Mint cards, which are independently certified of their condition. Here’s an article on Graded Pokemon Cards if you don’t know what Graded Pokemon Cards are. 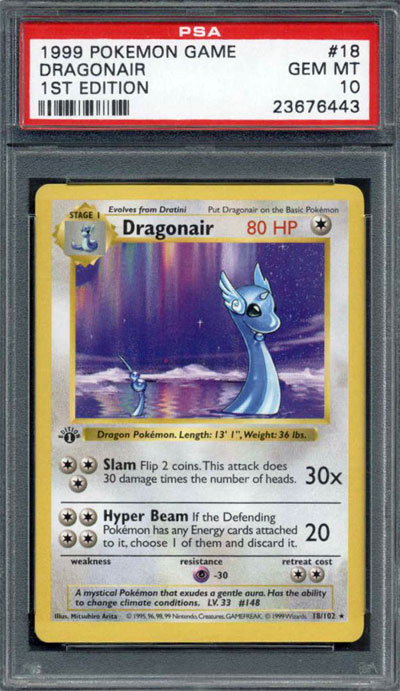 In October 2017, this copy of Dragonair sold for $1699.99.  This was the 30th highest-valued Pokemon Card sales-wise in 2017.  This Dragonair is a First Edition copy that was released in the Base Set in 1999.  It was graded as Gem Mint by the PSA.  First Edition Base Set Rare cards can command ridiculously high prices if they’re graded Perfect 10’s.  This is not even a foil!  Holofoil cards only appeared in cards #1 through #16 in this set.  We think people simply love the Dratini/Dragonair/Dragonite line, and this is the oldest card in that line.