Review of episode 413: "A Better Pill to Swallow"

Teaser:
The episode begins with our heroes walking down a path, where Ash suddenly
feels stomach pains. Of course, he just ate five hamburgers, so don't feel
too bad for him. In any event, Brock is out of the medication needed
(apparently this has happened before). Thankfully, a man appears (who Brock
and Misty initially mistake as a voice from nowhere, then as a troll), who
offers Ash some herbal remedy (judging by this level of trust in strangers,
I'll assume it is also still safe to hitchhike in Johto), which cures Ash's
indigestion, but also has a nasty side effect (one of the dangers of natural
medicine).

Anyway, the man ("Old Man Shuckle" herein OMS) explains he deals in herbal
medicines derived from juices produced from Shuckles. He tells the group
about a special purple (shiny, if I remember correctly) Shuckle that produces
a fluid that subdues any Pokťmon. Brock is very exited about this, as he
believes it will help him become the world's greatest breeder, and wants to
go look for it. OMS introduces us to his Bellsprout, which helps him collect
Shuckle. 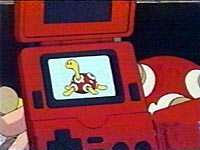 Of course, Team Rocket covertly listens in, and decide to get the purple
Shuckle for themselves. Eventually they do, and decide to test out the juice.
Our heroes catch up with them, where we find that Meowth has taken to James,
as have all the Shuckle. OMS explains that because they drank the undiluted
(pure) solution, it will be like this for 3 days and 3 nights, as they are
emitting Pokťmon pheromones, substances used by many animals (but not humans)
to attract mates.

The trainers attempt to engage in a Pokťmon battle, but the Pokťmon (Pikachu
included), are too attracted to Team Rocket.

Having seen enough, OMS sprays a

pheromone neutralizer, and everyone returns to normal (or what passes for
it). At this point, the Shuckle Team Rocket was holding licks Jessie by her
belly button (or navel, for you Match Game fans), allowing it to escape.
Jessie then realizes that Pikachu has also been released from the effects of
the pheromones. At this point, Team Rocket begs to be shocked out of the
episode. Pikachu complies.

Tag:
OMS offers Brock the Pokťmon-taming solution, but Brock refuses, saying that
it wouldn't be fair. Meanwhile, Team Rocket is surrounded by a group of
Pokťmon, which will be in love with them until the pheromones wear off, at
which point...ouch.

Moral of the episode: Be careful what you wish for-you may get it!

Analysis: I love this episode, but quite frankly, I'm amazed it ever made it
to air. Sure, it's not Holiday at Acapulco, but it's headed towards areas
that will probably give us nightmares for weeks. I may never complain about
James's wardrobe again.