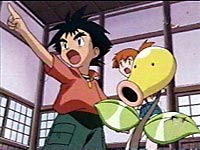 Ash and them have finally reached Violet City. They are walking around, when suddenly, two small kids start playing with Ash's Pikachu. Pikachu gets frightened, goes to shock them, and Ash picks him up, getting shocked in the process. A lady runs out, and tells the kids to stop bothering the trainers. The lady recognizes that they are Pokemon trainers. She then reveals that she is a teacher at a Pokemon school, and that her name is Priscilla. She then asks Ash to guest speak in one class. They go into the school, and Ash gives his lecture about Pokemon. The teacher then gets the students to go outside so Ash and they others can show off their Pokemon. The kids are absolutely amazed!!! Ash then notices a tower in the distance, and Priscilla reveals that it's the Sprout Tower, and it's held up by a base that sways like a Bellsprout. Priscilla says that their class is going on a field trip to the tower. Just then, a boy named Zachy is trying to take Pikachu as his own. He jumps on Pikachu, gets zapped, Ash goes to stop him, and Zachy takes a Pokeball, and tries to catch Pikachu. Pikachu runs away, and Zachy gives chase. Ash then takes his Pokemon, tells everyone to go to the tower, and pursues Pikachu. Scene switches to Zachy, and he's managed to catch Pikachu in the Pokeball! Ash grabs the ball, Zachy still holding on to it, and they both fall into a hole. T-Rocket shows up, and tells Zachy to give them the Pikachu. Ash then asks for Pikachu back, and Zachy tells him no, that's he gonna deal with T-Rocket. He throws the Pokeball, and out pops..... a Bellsprout???
Who's that Pokemon? It's Cleffa!!
T-Rocket is using voice manipulators to lure out Pikachu. A net is thrown out, and they miss! Ash and Pikachu are reunited, and they beat T-Rocket again! Zachy is totally amazed! At Sprout Tower, Brock and Misty are comenting on the tower's base. Suddenly, T-Rocket crashes into the roof, but noone knows they're there. Zachy is quite disappointed that he caught a Bellsprout, and Ash is trying to convince him that he should try to make the best of it, but Zachy is still stubborn, and wants Pikachu! Back to Brock and them, T-Rocket has used Weezing to smoke everyone out, only everyone thinks it's a fire. Back to Ash and Zachy, Zachy is trying to trade Pikachu for Bellsprout. He starts crying, a Bellsprout cheers him up. Then, they arrive at the tower, and Ash tries to put out the fire with his Pokemon. They know it's not a fire, and go to investigate. T-Rocket is trying to cut down the base of the tower!! The only way they'll stop is if they surrender all their Pokemon. Pikachu goes to attack, and is captured, his attacks doing nothing to T-Rocket and their lightning-resistant clothing. Zachy then gets Bellsprout to attack T-Rocket with Razor Leaf. Pikachu is freed, the tower looks saved, but T-Rocket is running away on a missile they made. Bulbasaur and Bellsprout attack T-Rocket with Razor Leaf, and they start flying out of control into the sky! Zachy hugs Bellsprout, proud of his new Pokemon. T-Rocket is having fun on the rocket, and suddenly, it explodes in the sky, and T-Rocket blasts off again! Back to Ash and them, they are bidding farewell to the school and their students. Ash wishes good luck and good Pokemon to all students. Then then leave, and that's the end of the episode!